This week’s film – one line review
I enjoyed 75% of Indy 4, which I suppose is not bad, but I can’t help feeling a bit disappointed. I did think “that’s just silly” perhaps a little more often than is optimal.

Next week’s film
Not being interested in Sex and the City, I’ll probably just be rewatching Speed Racer (again) next week.

A Puzzle
If Green is Blue, Blue is Green, Red is Yellow and Yellow is Indigo, what is Indigo?

Note: this is a very silly puzzle that I invented, not a profound riddle or anything like that.

A Quote
This week I had cause to be reminded of a personal maxim of mine:

“Question everything. But not always out loud.”

A Link
I find Photoshop Disasters to be amusing sometimes for the things they find, and sometimes just for their obsessive attention to detail, highlighted by their quote “someone, somewhere, figured no one would notice. We are that no one!” (on the Spiderman 2 poster).

A video
This video demonstrates an audio/visual illusion in the way we perceive speech.

A picture
I  found the below image used on Wikipedia to illustrate the US democratic primary results. Suddenly it becomes clear why Hillary has stayed in the race – she thought she was playing Blockbusters. 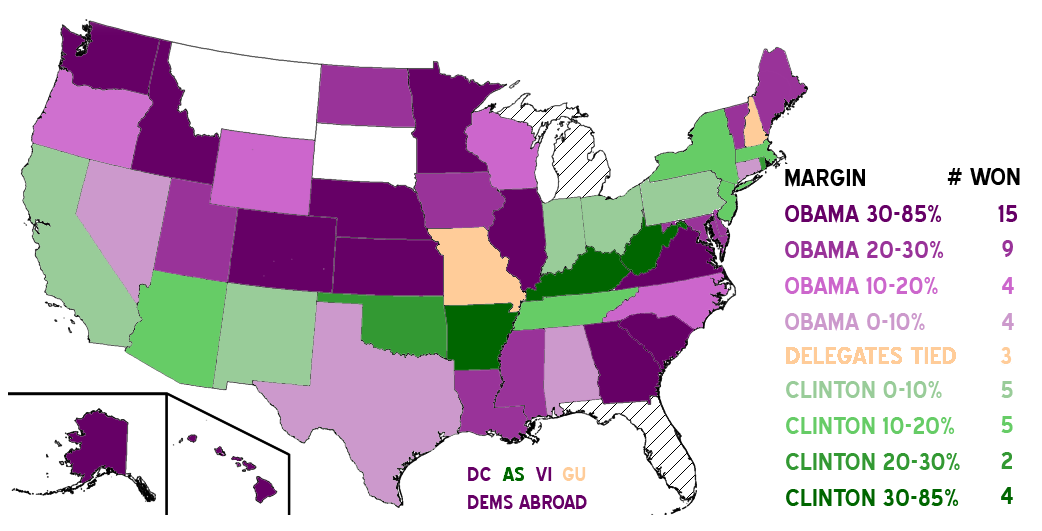