Mild NSFW warning: the last part of this edition embeds some pictures of female comic characters. There’s also a cat video, but I just assume everyone is fine with that.

Make-your-own hyperlapse video
Well, this is incredible: set a start and end point in Google street view, a target for the camera, and get as output a time-lapse video of that journey, in which you can still control the direction of the gaze – Google Street View Hyperlapse.

Rabbit Hole: No to No UI
Timo Arnall says No to No UI (more commonly referred to as “invisible design”), and puts forth a detailed and cogent argument, but the main reason I recommend reading it is the warren of rabbit-hole links he uses as implicit citations. For example, Kevin Slavin talks about algorithms, how they don’t share our goals and can have emergent properties we can’t understand like a flash crash due to algorithmic stock trading, and then he takes a hop from “60% of Netflix viewing comes from the recommendation algorithm” (not true if you check carefully), a skip to “Epagogix can algorithmically evaluate the box office potential of a scipt” (no) to jump to this wonderfully flippant quote:

What does a flash crash look like in hollywood? Maybe it’s already happened! How would we know?! 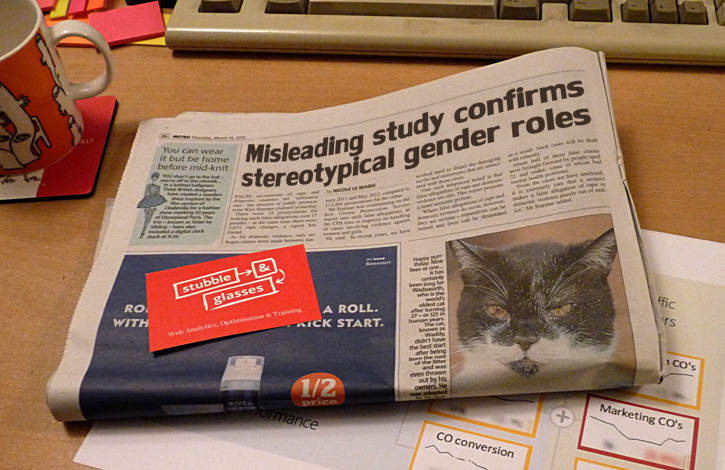 Reporting on a reasonably conducted study’s findings on heterosexual parternships, the Telegraph ran with the headline “Average man has 9 sexual partners in lifetime, women have 4.”

First, what’s wrong with this claim?

Second, how does such a result come about?

Third, as the second is too easy for Things readers, I invite you to guess: which sub-set of respondents is most responsible for the discrepancy?

As some of you will know, I work at a web analytics consultancy where we disentangle data conundrums not dissimilar to this, so I wrote up my findings in a blog post – I found the answer to the last question quite satisfying!

Animal Videos – flocking starlings, evil cat
Kottke has the perfect pair of Starling flock videos – the standard high definition, clean and beautiful static camera one, and then a low resolution one that’s much more thrilling. You should watch both on as big a screen as you can.

Meanwhile, in the sub-genre of YouTube videos enlivened by a dramatic movie score, I declare this cat video the winner:

Games and stories
There is a tension between making a fun game and telling a good story; it seems to be very hard to do both at the same time. I think this might be because these represent two opposite learning methods; learning from someone else’s example, and learning by trying stuff out yourself in a safe environment.

But there’s a flip side of this conflict: sometimes, in the course of playing a game, you generate your own story, one you would never normally get to tell. Here’s an example.

I once played a match of 4-player local GoldenEye, back when I wouldn’t have needed to specify that 4-player GoldenEye was local. I ran out of ammo, and was chased down a twisty dead end by my friend who had some kind of machine gun, so I was pretty much doomed. I did have one thing though, and I said as much:

“I’ve got a proximity mine. If you come any closer I’ll kill us both!”

He laughed, and continued to pursue me round the final tight corner.

I set the proximity mine.

It killed us both.

I don’t remember the final score of that game – I don’t think I did well. But that tiny story remains one of my favourite gaming moments. For that reason, I was very interested to read Tom Armitage’s review of Game Dev Story, a cute little game that crudely simulates running a game development studio through the major console generations, because he made this assessment:

Game Dev Story exemplifies a kind of mechanical storytelling: stories told not through text or voice-acting, but through coherent systems that cannot help but generate stories. 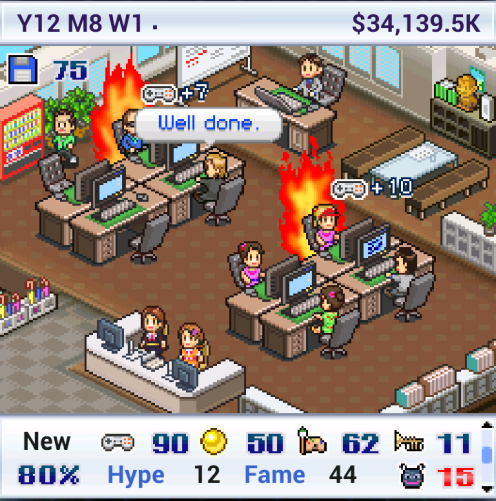 I gave it a go, and he was absolutely right. Apart from the sense of ownership you get from making company decisions, the ability to name your company and the games you produce has some kind of magical effect that makes the whole thing strangely compelling.

It’s not a great story, but it meant a lot to me: after a difficult start, Squidopolis released a string of titles whose success built a war chest which specially trained hardware engineer Stephen Jobson put to use in developing the ultimate console: the Kraken, for which we then produced a string of hits, despite some major setbacks in production. 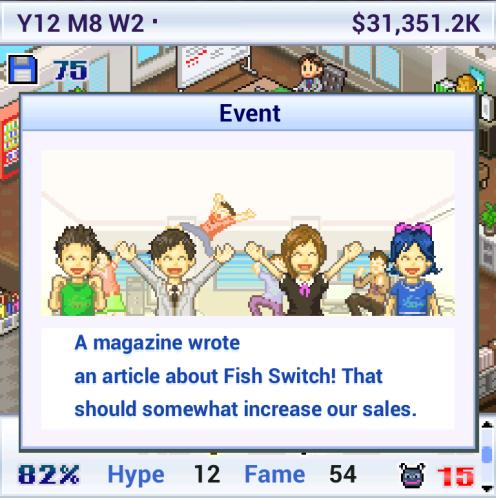 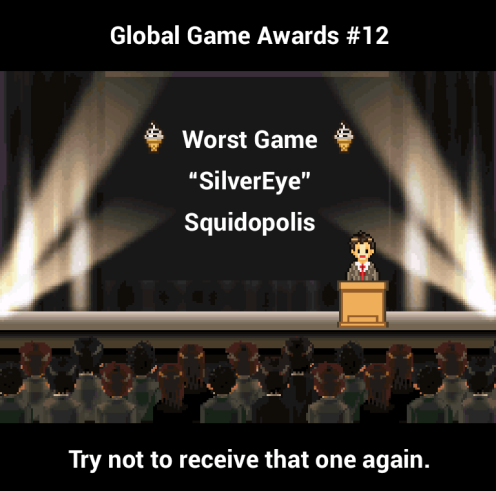 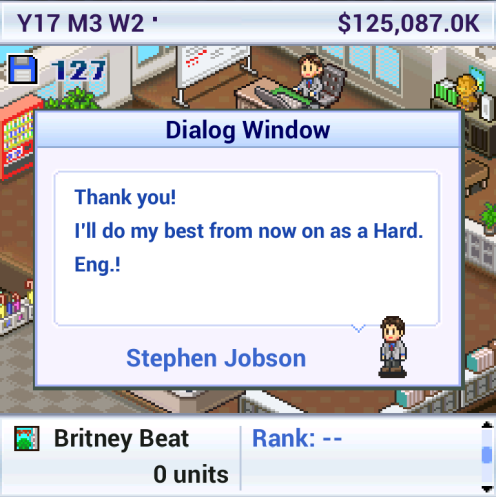 Game Dev Story is available on Android and iOS.

Folk Games
I like the term ‘folk games’ for equipmentless games a group of people can spontaneously play, such as Standoff, or Ninja, or Fantasy Fencing. I highly recommend all of those, the last one being particularly notable as it is an example of the ‘Tiny Games’ that Hide & Seek are putting into an app (so you don’t have to memorise these sort of things for every occasion). That’s happening on Kickstarter, and with a day to go at the time of writing it’s already funded, but I still recommend the £12 tier (which includes their Board Game Remix kit) to help reach the stretch goals!

Tim Link: Devil May Dance
I like putting in place processes in which incremental progress is made towards a goal, and this year I reached the end of my biggest project so far: I finished my webcomic, Devil May Dance, which I had been updating weekly since April 2006.

The premise was to swap the macho protagonist of the video game Devil May Cry with the feminine lead of seminal rhythm action game Space Channel 5, and see how they got on in one another’s shoes, partly as a way to investigate gender expectations, and partly as an attempt to get some cheap laughs. 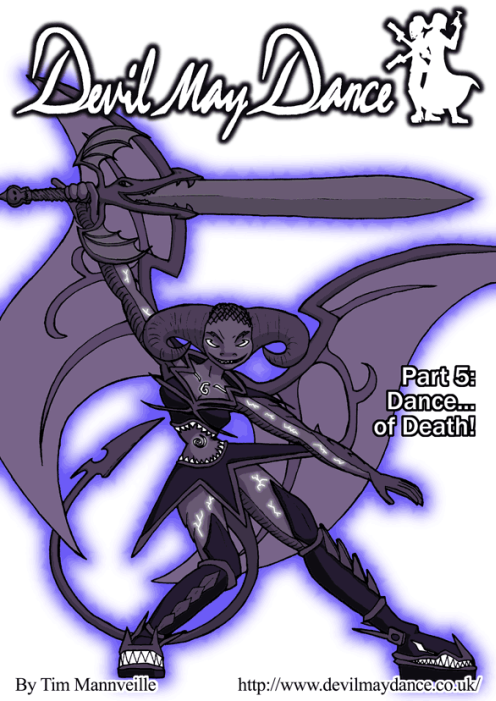 If that sounds interesting to you, or if you’re curious what would happen if I wrote a story involving time travel, you should check it out.

I also did a little summary of the web stats of the comic over its lifetime.

But more importantly, there’s another Kickstarter I’d like to draw your attention to. A friend of mine illustrates comics using primarily traditional techniques, and although she works incredibly hard, I get the impression this means she can’t turn out pages at the kind of speed a regular publisher would like (on account of having to wait for individual colours to dry!), so this is exactly the kind of thing Kickstarter is good for – delivering the kind of projects the invisible hand would usually hold back.

Unfortunately, according to kicktraq’s projection, at a little over half way through, the project has a 50/50 chance of success, so it’s going to need some extra help to make it. Check it out before April 24th! 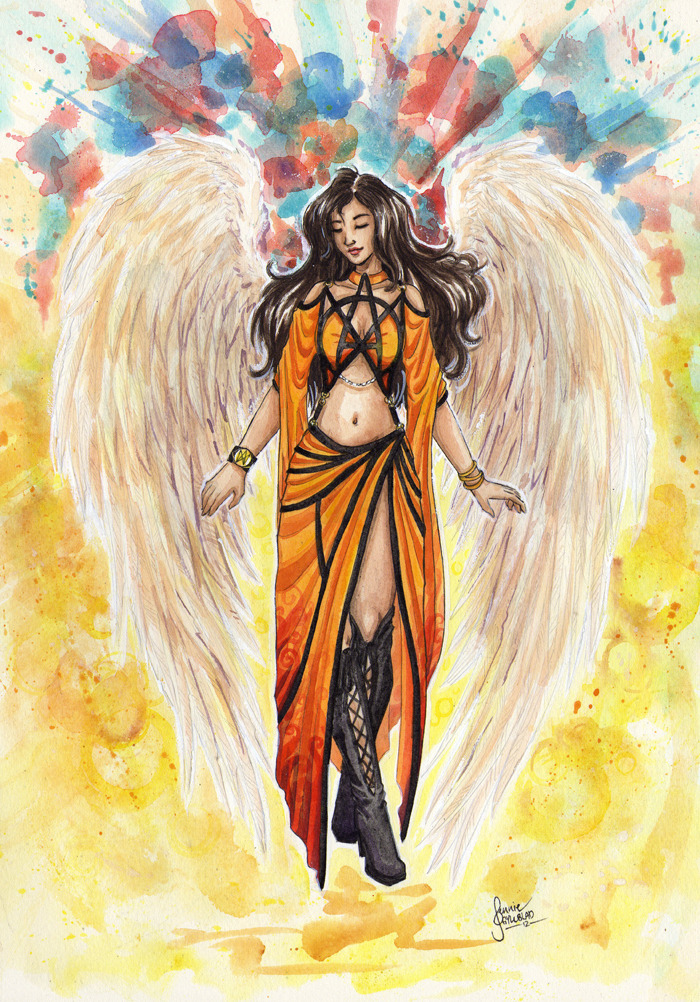 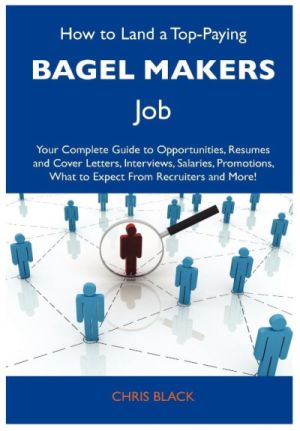 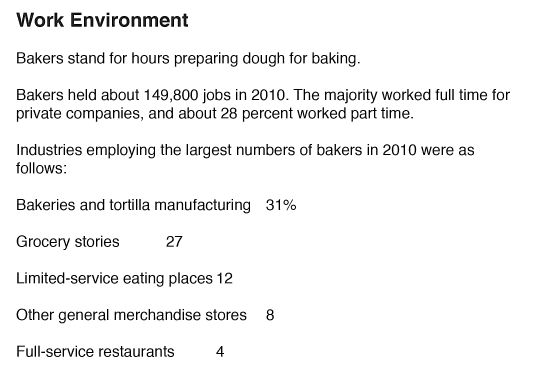 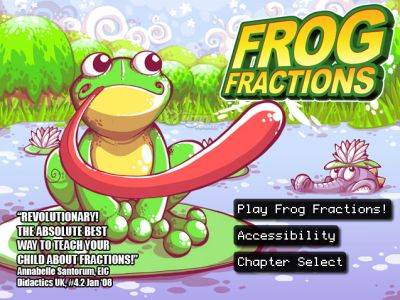