Comic – The Deep Ones

A few thematically related thoughts have been freaking me out quietly but insistently for many years: the idea that, when in the sea, you are in the same body of water as sharks and giant squid; the imagined sensation of floating somewhere in the sea and sensing something vast swimming just beneath your feet; the idea that the sea has not been thoroughly explored and that monsters may truly lurk in deep trenches. This short comic, “The Deep Ones” by Julia Gfrörer explores these ideas quite poetically and insightfully. 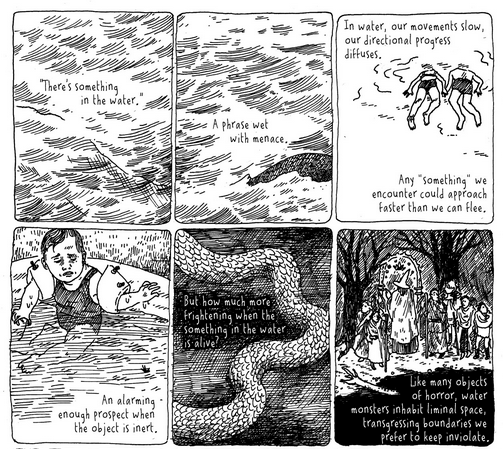 Music – Covers that that Trump Originals

Logistics note: reading through old editions of Things, about 50% of all YouTube videos I link to disappear after a couple of years. So I’m now including a link to a generic YouTube search that should work even if the one I chose has gone away.

While fully recognising that everything is subjective, especially music,  I hold that these covers are particularly notable.

Jose Gonzalez does “Hand On Your Heart”, sounds like he means it:
(In case of removed video, try this search)

In case you need reminding, here’s Kylie with the original:
(In case of removed video, try this search)

Similarly, Iron & Wine sings ‘Love Vigilantes’, a lovely and quite moving ballad about returning to family from war:
(In case of removed video, try this search)

That was New Order’s idea originally, but I’m just not as convinced by their version:
(In case of removed video, try this search)

Just in case it looks like I’m only into gentle acoustic covers, here’s something going the other way!

In Scott Pilgrim vs The World (a movie I will tell anyone that will listen is underrated right after I’ve tried to convince them to appreciate Speed Racer), Scott (Michael Cera) tries to impress Ramona (Mary Elizabeth Winstead) with a 30 second song he wrote about her:
(In case of removed video, try this search)

She tells him she can’t wait to hear it when it’s finished. That’s the joke.

The things is, this song is actually by Beck, which explains why it’s a surprisingly assured and satisfying chord progression – Beck contributed most of the original songs for the film. I like to imagine Beck saw this bit and thought “You know what, I will finish it” and came out with this:
(In case of removed video, try this search)

(via Iain) I had wondered if there was a corollary to Betteridge’s law of headlines relating to the weather. I hadn’t noticed that the Daily Express was particularly fond of weather-related headlines, but quite brilliantly Scott Bryan compared a year of headlines against what actually transpired back in 2012. The post is no longer up but you can find it on the internet archive.

Libraries caught up with the future when I wasn’t looking

Back when people were getting excited about the advent of ebooks and digital audio books, I remember a lot of intense discussion about what this might mean for libraries.

Turns out that all the pieces came together, and you can now digitally borrow these things from your local library directly from your device, for free. (Perhaps more accurately, you’ve already paid for it with your taxes). I’ve been using the Overdrive app to do it and it’s really quite brilliant.

Two caveats. First, you very reasonably do have to join your local library in the first place to get an ID and PIN. Second, don’t be tempted to create an Overdrive account using Facebook, because if you later want to borrow an eBook and put it on a device that doesn’t run Overdrive, you’ll need to go through some icky business with ‘Adobe Digital Editions’ (because DRM), and that doesn’t work if you used Facebook.

On the topic of DRM, I’m still convinced it’s a terrible idea for digital purchases, but I think it’s pretty much essential to make this whole borrowing idea work, so I’m happy to accept it there.

Free-to-play mobile games are trying all sorts of strategies these days to find a business model that works (because straight paid on mobile sadly doesn’t). One model is to create a game that never really ends, is completely enjoyable without spending anything, and in which spending gains you a small advantage of some sort. These games don’t make a huge amount of money for the people that make them, and the flip side of that is that they can give you a lot of fun for very little money.

Alphabear is one such game. It’s a really lovely word-puzzle game with some nice strategy. There’s an ‘energy’ mechanic (you can only play a certain amount and need to wait for your ‘energy’ to come back), but you can buy ‘infinite honey’ which removes the energy thing entirely. So if you enjoy the game, you should definitely do that.

Breakneck is another, and takes the form of a twitchy high-speed sci-fi sort of endless runner, reminiscent of Wipeout. If your device is up to it, it’s a very polished experience at a ridiculously low price. (iOS only – sorry)

Six years before The Neverending Story, Michael Ende wrote Momo, well known in his native Germany but undeservedly less well known here. It takes a fairly common message (to do with how you should spend your time / what is important in life), but rather than using a fantasy setting to metaphorically imply the message, he uses a fantasy setting as a way to state the message as directly and clearly as possible. Some books change how you look at life if you take the time to really think about them; Momo leaves you no choice. I thought it was brilliant.

Also, here’s a a quote from it that I like:

He looked down at the tortoise. ‘Cassiopeia, my dear, I’d like your opinion on something. What’s the best thing to do when you’re under siege?’

‘HAVE BREAKFAST,’ came the reply.

‘Quite so,’ said the professor

The Street Fighter movie is fascinating. Here’s a few key facts that let you know right away something weird is happening:

If nothing else, I highly recommend reading the Polygon article Street Fighter: The Movie – What Went Wrong, which pieces together the extraordinary story of how that movie came about. It sounds as if de Souza had a truly nightmarish experience as director, blocked from making the movie he wanted to at just about every turn (seriously – it’s incredible the movie got finished at all).

Having read the article I just had to see the movie for myself. As it turns out, it’s a rather brilliant B-movie that knows exactly how silly it is, and is tremendously enjoyable as a result! This often seems to be the case when the IMDb rating dips below 4.0 (it’s the 4.0-6.5 region you should avoid). My personal highlight: Guile (Van Damme), leading an assault on the bad guy’s base, in his state-of-the-art stealth speedboat, takes a moment to watch some home movie footage of himself and his good buddy (now captured) on a VHS casette he evidently brought with him, on the CRT monitor built into the stealth-speed-boat control panel, perhaps to remind himself what he’s fighting for. Amazing.

Even more brilliantly, there’s a director’s commentary evidently recorded by de Souza a few weeks after the movie came out (intended for the Laserdisc edition), in which he betrays no bitterness about the process of getting the film made, but rather conveys a genuine warmth for the material and pride in what they managed to achieve. The Street Fighter movie is a great example of someone being given life-lemons and making life-lemonade out of them.

I originally referenced Mitch Hedberg back in Things 104 in 2011. I finally bought one of his CD’s, Strategic Grill Locations, which is as funny as the many YouTube clips you can find of him would suggest, but instead lasts for almost an hour, which is pretty great.

He has some nice one-liners, such as:

I haven’t slept for ten days, because that would be too long.

But what I didn’t adequately convey in Things 104 is his delivery style. His laid-back demeanor and accent are part of it, but his unusual prosody is what really makes his material work. So I can give you this quote, which is okay, but it’s infinitely better when he’s saying it:

I was at the airport a while back and some guy said “Hey man, I saw you on TV last night.” But he did not say whether or not he thought I was good, he was just confirming that he saw me on television. So I turned my head away for about a minute, and looked back at him and said “Dude! I saw you at the airport… About a minute ago… And you were good.”

In some ways the mirror opposite of Mitch Hedberg and his non-sequitur one-liners, Stewart Lee makes long-form stand-up comedy. I didn’t really understand what he was trying to do until I read his book, which I guess makes him hard to recommend.

That said, when I saw him live, I found one particular segment – in which he responds to a silly statement from UKIP with a 12-minute long reductio ad absurdum argument – to be a brilliant result of the weird territory he has been exploring. So I was glad to find that someone has . (Link died, try this one or this Youtube search – TM 24/01/18)

Let’s have another breakdown:

… ouch. So what went wrong there?

One problem was the release timing: they went out against Disney’s Chicken Little (which people went to in droves, assuming Disney’s first foray into 3D would be as good as Pixar – Chicken Little made more money than Disney’s Lilo & Stitch, conclusively disproving money as a measure of movie merit), and in the second week when people realised Chicken Little wasn’t that good, Harry Potter and the Goblet of Fire came out.

The other problem was the perception that Zathura was just “Jumanji in space, without Robin Williams”… which is actually a very accurate description.

But while it is that, it’s also brilliant, partly because space is cooler than jungle, and partly because Robin Williams isn’t the best thing about Jumanji anyway. Jon Favreau makes use of practical effects wherever possible (for example in the trailer below, that robot smashing through the doorway is literally doing that; even the jet-flames on the ships are practical), and this is particularly effective for the ever-increasing destruction of the house. Also featuring before-they-were-famous starring roles for Josh Hutcherson and Kristen Stewart, it’s just a really lovely film that is unjustly overshadowed by its precursor.

Okay, one caveat: there’s some stuff that’s almost cool sci-fi but then is instead just fantasy, which some of you might find a bit disappointing. As is so often the case, keep in mind it’s a fantasy film rather than a sci-fi one, and it’s all good.