Tim Game Thing
If you ever watched Knightmare and wanted to be the kid in the vision-restricting helmet asking “Where Am I?”, or if you wanted to be the team responding “You’re In A Room” and then frantically shouting “Sidestep left”, or perhaps if you wanted to come up with your own ideas for dungeons for those players to explore, then I recommend you come along to Hide & Seek’s free Sandpit event this Friday 25th May (6.30pm-10pm at the Royal Festival Hall near Waterloo), where I’ll be running a game that gives you an opportunity to do exactly those things.

There will also be a lot of other games going on, which sound pretty amazing, so read all about it, and come along.

Video – Cat and Kitten webcams
Which is more compelling: a high resolution webcam of some kittens, or low-resolution webcams you can move around and remotely operate cat toys through (if you’re prepared to use Internet Explorer and Silverlight)?

It turns out that even though the latter sounds superficially cooler and more engaging, it’s nowhere near as good as high-resolution kittens.

Link – Jason Rohrer’s Chain World
Jason Rohrer has made some very interesting games (I particularly like Sleep Is Death (or at least the idea of it – I haven’t played it yet), Inside a Star-filled Sky, and Passage is apparently pretty amazing (and very short) if you don’t play it stupidly the first time like I did), so it’s not particularly surprising that he came up with the winning concept in a competition to pitch an idea for a game that in some way represented the abstract idea of religion, and which, when actually released into the world, generated some pretty fascinating results.

Heavily Caveated Film Recommendation
The Green Hornet is a Seth Rogen action/comedy vehicle directed by Michel Gondry. If you analyse that sentence you may realise that this was recipe for disaster. With Seth Rogen starring and also writing (with long-time friend and collaborator Evan Goldberg), there was inevitably going to be some creative conflict with a director as idiosyncratic and driven as Michel Gondry (the man behind some of my favourite music videos).

Refreshingly, listening to the commentary makes this very clear, as Gondry, Goldberg and Rogen frequently reference the arguments behind almost every good idea in the movie, and occasionally break into new arguments about them (“We had to convince you that this would work!” “No no no! This was my idea! You guys didn’t want to let me do it!”).

This conflict doesn’t particularly damage the movie, but I ended up wishing Gondry had had more things go his way, because all the really weirdly brilliant parts are unmistakeably his. For example, at one point, the bad guy wants to send a message out through his criminal network, and this is how Gondry represents it:

It’s also great to hear his enthusiasm for his own ideas in the commentary, as when this scene starts: “This is awesome, look! Two cameras from one camera! How… did… the hell it happen?!” (Answer: they got the actors to stay in position while shooting one part, then came back to them and picked up shooting from the same position, then forced the shot to match in digital post-production, which is fine, but just count the splits and think about actually pulling that off).

The real problems with this film (to save you the trouble, it’s a 6.0 on IMDb and 44% on Rotten Tomatoes) are I think twofold:

1) Goldberg and Rogen consciously chose to reverse many of the staples (some would say clichés) of a superhero movie, which is admirable, but as is so often said, you need to be very familiar with the “rules” of any art form if you want to break them and still have the thing work, so this sentence ends in just the way you would expect.

2) There’s a fine art to crafting an action movie in which the audience can root for the protagonists, even when they’re harming or even killing bad guys. I don’t know how you pull this off, and apparently neither did anyone making The Green Hornet, because these moments frequently feel wrong.

All of which was fascinating, and I don’t regret watching the movie at all.

Answer 2A and 2B – Temperature/Pressure Pairs
Do there exist a pair of points opposite one another on the earth with exactly the same temperature and pressure? I say yes, and here’s my hand-waving explanation for that.

Stage 1
Let T(x) and P(x) denote the temperature and pressure of point x. 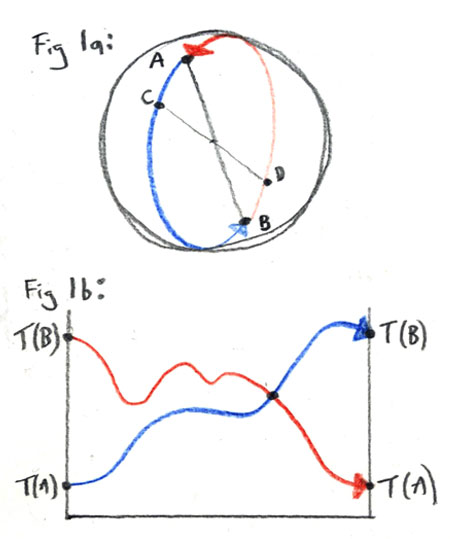 In Fig 1b, we chart the temperature of the opposite points as we move around these paths. Just as with the Joss Whedon ascent/descent puzzle, since each line of temperature is continuous, they must cross at least once, and this represents a point at which the temperature is equal on opposite sides of the globe (points C and D in Fig 1b). 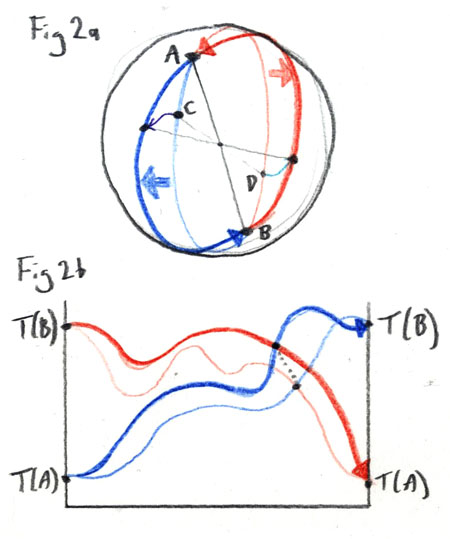 This starts to trace out a line of equal-temperature-opposite-points on the globe (turquoise and purple lines in Fig 2a).

Stage 3
If we continue that rotation all the way around, we trace out a continuous wiggly line of equal-temperature-opposite-points around the globe (Fig 3a, purple and turquoise lines). 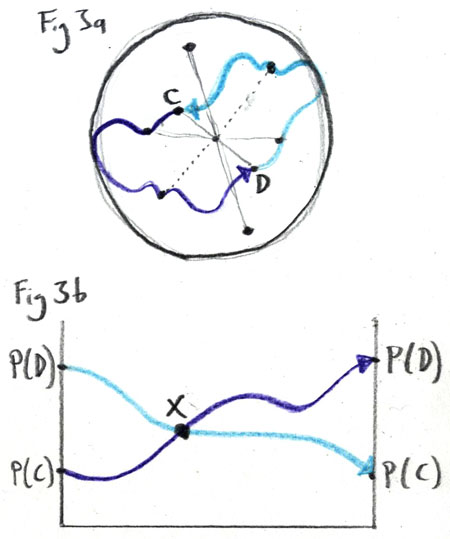 We now consider two opposite points on this line, C and D (Fig 3a). We consider the pressure as we trace out a path from C to D (purple line) and the corresponding opposite points on the path from D to C (turquoise line). We can now apply exactly the same argument as in Stage 1 – the two lines of pressure (Fig 3b) are continuous and so must cross at some point, X. At that point, both the temperature and pressure are equal on opposite sides of the globe.

While this is not a proof, it’s reassuring that the Borsuk-Ulam theorem does prove that the result is true, although that’s no garantee that this reasoning is completely sound.

Dom Camus supplied a similarly hand-waving explanation but with a much more audacious line of attack, so if you liked the above, you should definitely check it out.

Puzzle Level 3 – The Crumpled Map
The final level in this series (suggested to me by Tarim) is one I don’t have any kind of hand-waving proof of, but I would love to see one.

Imagine you are on a lovely desert island with a selection of your favourite music, a pencil and paper, and an uncannily perfect map of the island. Actually, only the map is important.

If you lay the map on the ground and align it perfectly with the island itself, it’s quite easy to visualise that there must be a single point on that map which corresponds precisely to the bit of the island directly below it.

Now imagine folding and crumpling the map in any kind of way (but not tearing it) and throwing it anywhere on the ground. Wherever it happens to land, will there still be a point on the map that exactly corresponds to the place on the island directly below it? 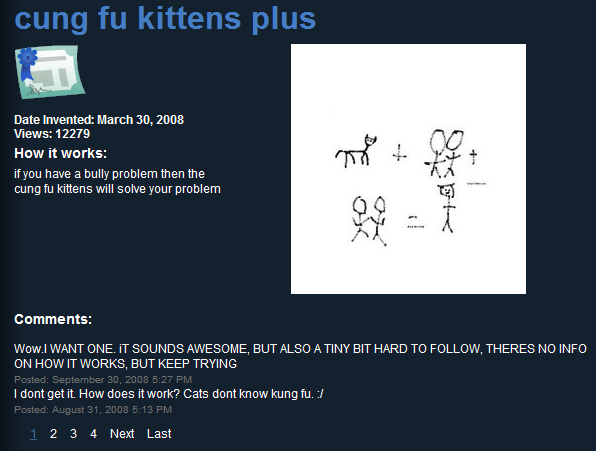