Last week, Things was once again postponed due to time pressures burning my midnight oil candles at both ends. However, now that both my IDM evening course and my PhD are over, I theoretically have more time, and I’ve also made progress with my answer to the puzzle from Things 46 on how to get things done at sub-weekly intervals (see puzzles section below), so future updates may return to regularity.

Films
I finally caught Synecdoche, New York. Imagine Charlie Kaufman (Being John Malkovich, Eternal Sunshine of the Spotless Mind) doing a ‘Memento Mori‘ piece. It’s like that. I think it’s the best film I’ve seen since Speed Racer, which is a statement almost entirely devoid of utility or cogency.

Video
It’s been quite a while since I featured a ‘cute animal’ video. Here’s three pug puppies demonstrating the comedic value of turning your head on one side when confused, an action which, as I understand it, is referred to as ‘baroo’ in cute animal watching circles.

Link
Location based services – most commonly applications on your mobile that help you do things by knowing where you are through GPS or mobile phone mast signal interpolation – are on their way. (In terms of the hype cycle I think they are currently falling from the ‘peak of inflated expectation’ to the ‘trough of disillusionment’ before finding genuine utility). Mathew Honan tested a bunch of these services and wrote about it in Wired, in a long but important article.

My personal take is that most of the services he tries are like MySpace in that they work okay when the only other people on there are People Like You, but in order to scale they will need Facebook-like privacy control. (Specifically more like the new controls Facebook are adding to the publisher, and I also suspect a time window would be added – e.g. Share my live location with these people, for the next 8 hours only).

Quote
I like to think the years I spent in higher education were successful by this rubric:

“Nothing you learn in the course of your studies will be of the slightest possible use to you in later life – save only this: that if you work hard and intelligently, you should be able to detect when a man is talking rot. And that, in my view, is the main, if not the sole purpose of education.”  – John Alexander Smith

Picture
I’m interested in creating useful visual representations of arguments, as I feel sure there is a good way to do it, but I haven’t seen one yet. (I’m currently working on an idea for one which will appear in Things when I have a first draft).

Here’s a version for the same-sex marriage debate by Patrick Farley, based on observed debates on Facebook, which is pretty good (click for big): 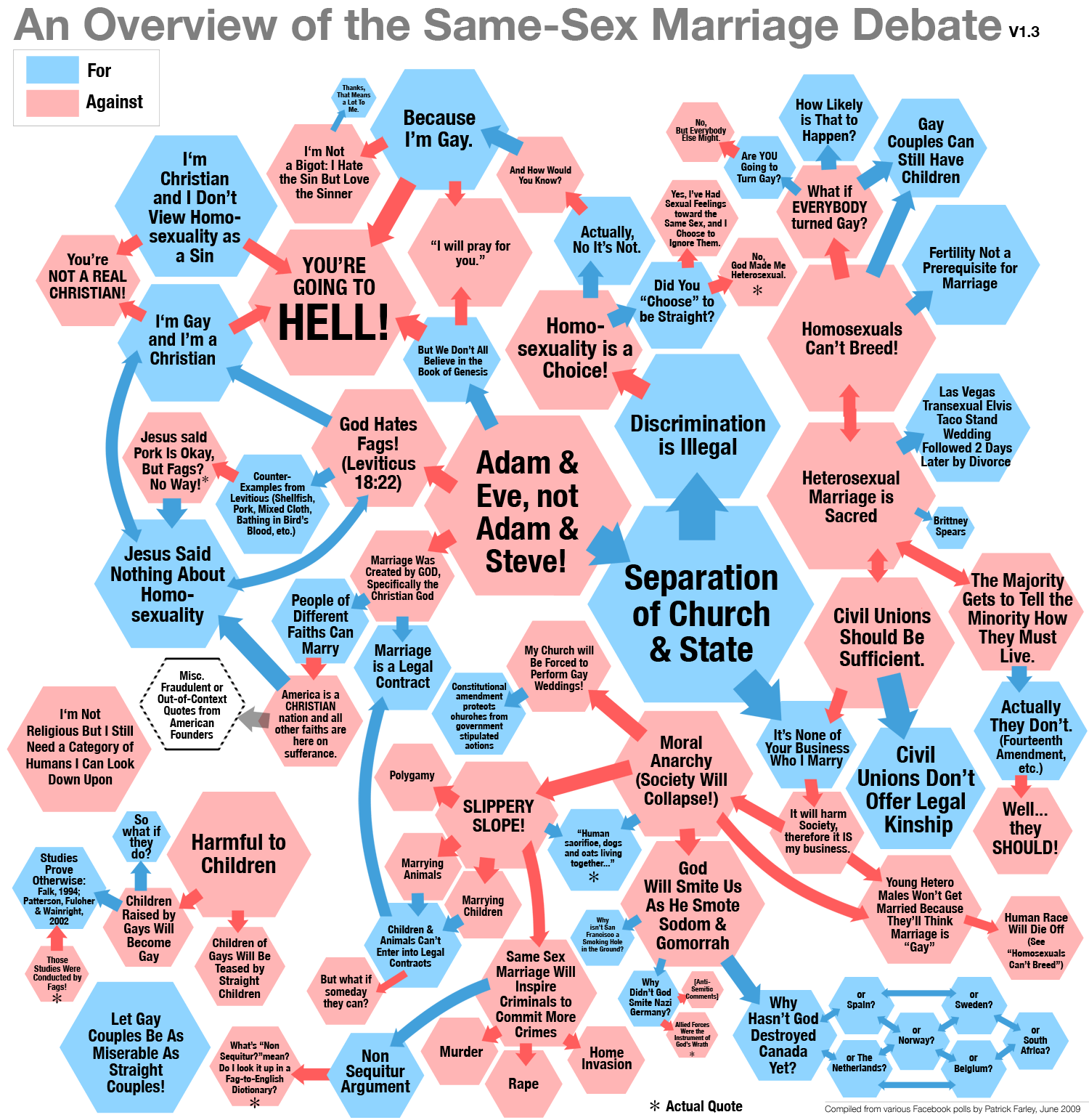 This week’s puzzle
As the number of people on the CC list for Things has grown, the amount of reply-to-all discussion seems to have decreased. Currently there are 11 people on it, including me.

It seems clear that some threshold has been passed and a CC list discussion really works best with around 5 people.

Both of these solutions have disadvantages. What do you think?

On a related note, how do you think I should credit people’s answers to each Week’s puzzles? (In the example below, I summarise the answers people gave that matched my own thinking, and cite by first name the answer I hadn’t considered).

Puzzle from Things 46
I asked for good ways to develop routines with time periods somewhere between daily and weekly. My answer was a spreadsheet programmed with the intended goals and frequencies and set to load up when I switch on my PC.

After trying this out for a few weeks it seems to be successful, and I’ve uploaded a demo version. For a given task, a given ‘davelength’ (a portmanteau of ‘day’ and ‘wavelength’, setting the intended number of days I want to elapse between instances of the task), and a weighting factor, the spreadsheet highlights if I am due to do any tasks today, and if so, which one to prioritise. Upon completing the task I just have to enter the current date in the ‘Date last done’ field.

It would probably work well as an iPhone app, which means someone has probably done it already.

Last week’s puzzle
Reasons people prefer reading writing on paper than a screen seem to breakdown in to 3 main categories:

1) Visual. Resolution and emissivity of screens are issues. In principle technology should be able to overcome these concerns.
2) Convenience. A piece of paper can be folded and put in a pocket, annotated, pinned to a wall, doesn’t need electricity, and is easily carried around to read in many situations. But once again, technology could theoretically match this in most regards, and exceed it in others – think adjustable font size, editing rather than crossing out, digital annotations (including a social aspect), searchable text, and backed up data, for a start.
3) Cultural Inertia. Even if technology addresses other concerns, people that have grown up reading from paper will be resistant to change. The added convenience factors mentioned above will have to be significant before a real transition can take place. (Thanks to Laurence for pointing out this one).

Things now returns after a brief hiatus during which I revised for and took my IDM Diploma exams. They seemed to go okay.

Movies
I saw Terminator Salvation, which I can’t particularly recommend, and Blue Velvet (on DVD), which I can.

Video
The intro to the Beatles specific Rock Band game is a wonderfully conceived and animated potted history of the band.

YouTube quality if your PC isn’t up to it:

Link Google Squared is like Google’s approach to what Wolfram Alpha does. For example, if you search for planets, it tries to understand what you are looking for and what useful things you might like to know about instances of that thing, using Google algorithmic magic.

When Wolfram Alpha has an answer, it’s right – when it doesn’t have an answer, it has nothing. Google Squared lives in the fuzzy space in between.

As a side effect, this means you can use Google Squared as a kind of I-Ching / astrology / random fortune generator.

1) Go here http://www.google.com/squared/
2) Put in your surname
3) If you get results, use ‘add items’ at the bottom to add the first names of your family – if you don’t get any results you will be given some blank fields in which you can enter the first names directly
4) In the top right you can add additional columns. Type in ‘awards’ and press ‘add’
5) Find out how much your family members have won according to the Google Squared lottery!

You can see what it thinks about you in other ways – for example, add a column titled ‘orbital period’. Turns out my sister has an orbital period of 1,975.4045670 days!

Quote
‘Newsarse’ [Now NewsThump – T.M. 1/7/11] is like a less polished, UK version of The Onion, providing a satirical take on current events from a UK perspective.

YouTube’s spokesman states “we are pleased to offer not only graphic images of canine dismemberment, but also a platform for viewers’ irrelevant comments and violent outbursts of racism.”

Pictures
In the past couple of weeks I saw two fascinating ways of doing something different with comics.

Choose-your-own-adventure comic based on reading speed:

One character going left to right, one top to bottom:

This week’s puzzle – paper
Why do people generally prefer to read writing on paper than on a screen?

Last puzzle – buttons
The puzzle regarding why buttons do up the way they do (one way for male and the other for female) is a difficult one, since answers cannot be proved, and as such it is all too easy to come up with one theory and feel the matter to have been resolved.

Here’s how I broke it down in reply to some suggestions on the CC list:

There are actually two questions bundled up – why is buttoning consistent, and why is it the way it is for the two genders.

Assumptions:
– Buttoning requires both hands to perform a fairly dextrous action and has no particular handedness bias
– Being familiar with buttoning one way will tend to make clothes that button the other way less desirable
– People will tend to wear clothing items for their gender, not so often clothing of the opposite gender

Under these assumptions, we can expect consistency of buttoning to emerge for each sex (but not necessarily opposite to one another) from random starting conditions, and a slight bias one way or the other at the start is likely to have a strong effect on the final outcome.

Arguments could be made in each direction, as it would only take a small effect to tip things one way or the other.

I found an interesting viewpoint on why it should be the opposite way for males vs females in a seemingly well-informed article on a period costume site.

From the last paragraph:

“Since female clothing took on more and more features of male clothing in order to express emancipation […], it became necessary to establish a feature that signalled that an item of clothing was, despite its male appearance, nevertheless female.”