This week’s film – one line review
Happy-Go-Lucky was a film about an optimistic nutter, her crazy friends and family, and an intense conspiracy-theorist driving instructor. It wasn’t really much more than these people interacting, but that was very entertaining nonetheless.

Next week’s film
Next week I plan to catch the preview of Forgetting Sarah Marshall.
Imdb rating: 8.1 /10
Rotten Tomatoes rating: 83%

Trailer: FilmCrave seems to fill the niche I’ve been looking for of a film database with easy access to trailers:
http://www.filmcrave.com/movie_page_main.php?id=25468

The trailer doesn’t look entirely convincing to me, but it’s the guys that did Superbad and Knocked Up, and 8.1 and 83% are impressive figures, so that convinces me.

It’s a serious one this time!

A mad dictator has his team of 100 scientists build him a superweapon. Having completed the task, he decides to kill them all, but his advisor convinces him to instead use the following method of killing, which will permit some to survive:

The dictator will then take a gun, and starting with the scientist at the back, ask him to guess whether he has a black or a white hat on his head. If the scientist does anything other than say ‘black’ or ‘white’ in a monotone voice, he will be killed. If he is wrong, he will be killed. If he is right, he goes free. The dictator will then go to the next scientist in line and repeat the process all the way to the front of the line.

The advisor tells the scientists that this will happen in advance, so they are able to prepare some kind of strategy.

What strategy could they devise that would allow the most to survive?

A Quote
Me: Wow, this compilation has the Beach Boys on it!
My sister: What are they doing on there?!
Me: God Only Knows.

A Link
I’ve always been interested in the paranormal – both how it suggests there exist things we still can’t explain, and also the way people delude themselves into misinterpreting things. Just browsing this forum is absolutely incredible:
http://www.unexplained-mysteries.com/forum/

A video
The music video of one of my favourite tracks tells a dramatised version of the story of Laika, the dog that the Russians sent into orbit. The dog sings and the scientists dance. Brilliant!

A picture
The fun you can have attaching balloons to your car: 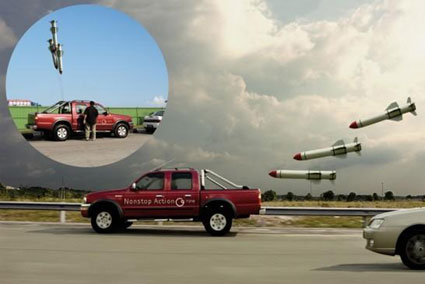