This week’s film – one line review
Wanted was an extraordinary hotch-potch of the ridiculous and the sublime, and I highly recommend it to anyone that liked the look of the trailers. Incidentally, it now has 71% on rotten tomatoes, and I can’t help noticing that WALL-E is on 98%, but we have to wait another 3 weeks for that.

My review of Wanted:

A comedy about what it would be like if someone with Superman-like powers was a degenerate reprobate played by Will Smith, which actually looks as if it could be a highly original kind of superhero story.

A Puzzle
This week: philosophy.

One of the weirdest things about the universe is that it exists at all. Without even bringing God into it, either there was nothing and then suddenly it began, or something has been around (one way or another) forever, and neither of these two concepts seems plausible to our intuition. But in fact these are not the only two options. Can you think of any others?

A Quote
James Richardson: “The Man who sticks to his plan will become what he used to want to be.”

A video
A wild crow with “no known history of humanitarian benevolence” adopts a kitten:

A picture
Continuing the theme of cross-species friendship, an infra-red triggered camera set up to try to capture a picture of Bigfoot ended up capturing something even more bizarre – a raccoon riding on a wild hog: 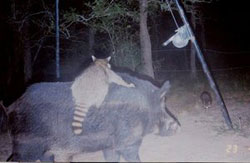 All part, incidentally, of an ingenious marketing strategy by the makers of the camera: