The Octonauts is a charming kids TV series, based on the picture books of the same name (referenced in the Things Kids Special in 2013). It features eight anthropomorphised animals on a Star-Trek-style mission to explore the ocean and encounter the Interesting Sea Creature of the Week.

I noticed that the same three (male) characters go on exploratory missions almost every episode, even when other (female) characters would be better qualified for the task at hand, which seemed odd for an otherwise progressive kids TV series. Looking for people who agreed with me on the internet, as you do, I stumbled upon this excellent mumsnet exchange:

TunipTheHollowVegemalLantern:  It is because of the patriarchy.

This turns out to be a highly versatile response which you can use to answer many questions about modern culture! It also has the benefit of sounding like a joke, while also frequently being accurate.

The Vox ‘Earworm‘ series by Estelle Caswell digs into various aspects of music, including a few really interesting pieces on long-term musical trends in the US pop charts. I particularly enjoyed the episodes on the triplet flow in rap, the fade-out, and especially repetition:

The ‘Fictional Fight Commentary‘ series does exactly what you hope: pitch-perfect delivery from Auralnauts creators Craven and Zak commenting on various famous fight scenes from movies. My personal favourite is the Revenge of the Sith Anakin/Obi-wan fight, but the Batman vs. Superman one is also great.

(Incidentally, Auralnauts had the dubious honour of having a video in which they removed the original music track get flagged as copyright infringing – for using the music track they removed, by the copyright holders of the song that was no longer present. Also incidentally, they made the generic film trailer I put in the last Things).

Every Frame A Painting was an incredible series of videos about movies and I’m amazed I haven’t featured it in Things before. It’s narrated by Tony Zhou, jointly written and edited with Taylor Ramos – although this latter part was only revealed in the post-mortem, the reasons explained in more detail by Taylor herself here, but more tersely one can say It Is Because Of The Patriarchy.

Aiming for quality over quantity, all 28 EFAP videos are brilliant, but as you have to start somewhere, I particularly recommend Jackie Chan – How to Do Action Comedy, The Spielberg Oner, and The Marvel Symphonic Universe.

Terrorism using the media as a megaphone

As I understand it, the aim of a regular terrorist is to create terror disproportionate to the amount of power they actually have. So perhaps the media response to these incidents should be a little more tempered, since that attention is exactly how terrorists gain a disproportionate response. I’m not sure there’s any good way to balance that though, especially with social media doing much of the amplification.

Still, I found it interesting that this quite wide-ranging study found a correlation between media coverage and subsequent violent incidents.

Poor estimation as a feature, not a bug

When doing indoor rock-climbing, or during my brief dalliance with extremely amateur parkour, I noticed that I and others tend to underestimate what we can physically achieve. We could jump further than we thought; we could stretch to reach a hand-hold that seemed too far; we could gain greater lift by running and kicking off a wall than we expected, and so on.

Now, I know that “evolutionary psychology” theories are usually untestable and often useless, simply servicing to reinforce one’s existing prejudices. Still, it’s easy to imagine that this physical capability bias (which I haven’t found named, but presumably must be) would work as a survival trait: creatures that overestimated their ability to achieve physical feats would presumably be at a mortal disadvantage in the long run.

This led me to wonder about another tremendously strong bias we have that runs the other way: the Planning Fallacy, best summed up by Hofstadter’s Law:

It always takes longer than you expect, even when you take into account Hofstadter’s Law. — Douglas Hofstadter

Superficially this bias seems like it should be a disadvantage. However, since many humans can benefit from one human’s work, perhaps we collectively benefit, as people work on things (and eventually, sometimes, complete them) that they wouldn’t have tried if they had correctly anticipated how long it would take, to society’s benefit.

It’s a trivial example, but I naively thought I could tell a particular story in a comic at one page a week in two years; it ended up taking more like seven. I probably wouldn’t have started it if I had realised that, but I’m glad that I did it, and now people – or at least, fans of two particular video games from 1999 – benefit from it.

When I first read about Bitcoin, I figured it was a cute idea but it didn’t scale, so couldn’t really work as an alternative global currency. Some of the scaling issues are now becoming apparent. As is so often the case, Charlie Stross has an insightful take on the matter.

I found this video quite satisfying:

In an age of abundance, we now routinely run into the problem of having too many things, and things like loss aversion make it difficult for us to deal with the issue. This scene from Labyrinth (1986) makes a lot more sense to me now than it did as a child:

Clare introduced me to a comic that summarised the ‘KonMari’ method (by Marie Kondo) of dealing with clutter. It isn’t really one method so much as a series of ideas and principles to apply to the task of decluttering. I think it’s particularly effective because it intuitively gets at some of the biases that make this a difficult problem. Here’s a few choice principles: 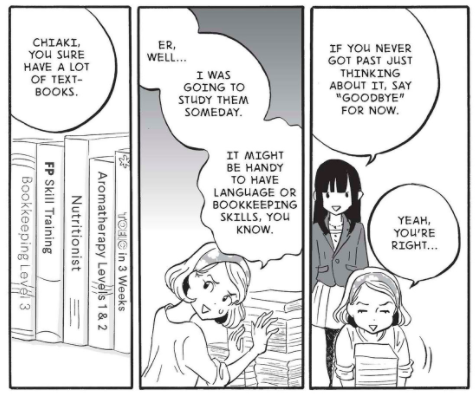 Most deeply, Marie Kondo observes that a lot of useless clutter takes us out of the present moment: we over-attach to the past with belongings that are no longer useful to us, and we over-attach to a theoretical future version of ourselves by keeping things we aspire to use but never will.

This echoes a message from the amazing show The Encounter (recommended to me by Tarim), in which a climactic insight is that “objects hold us stuck in time”.

There’s a KonMari method book or alternatively a comic version.