Link
A test audience on Facebook didn’t find this remotely as incredible as I did, but here it is anyway: The Swinger, an algorithmic process that can automatically generate a swing remix of a song.I recommend trying out whichever of the songs listed you are most familiar with, but for me “Money For Nothing” had the most profound effect.

Quote
Marie, during an argument: “Ah, but I’m a philosopher; numbers don’t exist.”

Puzzle
Anyone that has watched enough movies or TV is familiar with the dangers of an industrial freezer room: if you happen to get shut inside, you are doomed, since the door can only be opened from outside. But this seems like a very strange design flaw. Why are those doors designed in such a way?

Picture
As a vegetarian, I’ve found myself in many minor debates on food ethics over the years. A strange feature of these debates is that meat eaters have not generally applied as much thought to what they personally think they should or should not eat, and as a result vegetarians (and especially vegans) tend to find themselves arguing against the same instinctive, poorly-thought-out arguments every time. The Secret Society of Vegans found an excellent answer to this recurring feature of any v*gan’s life: a ‘bingo’ card for use during such debates: 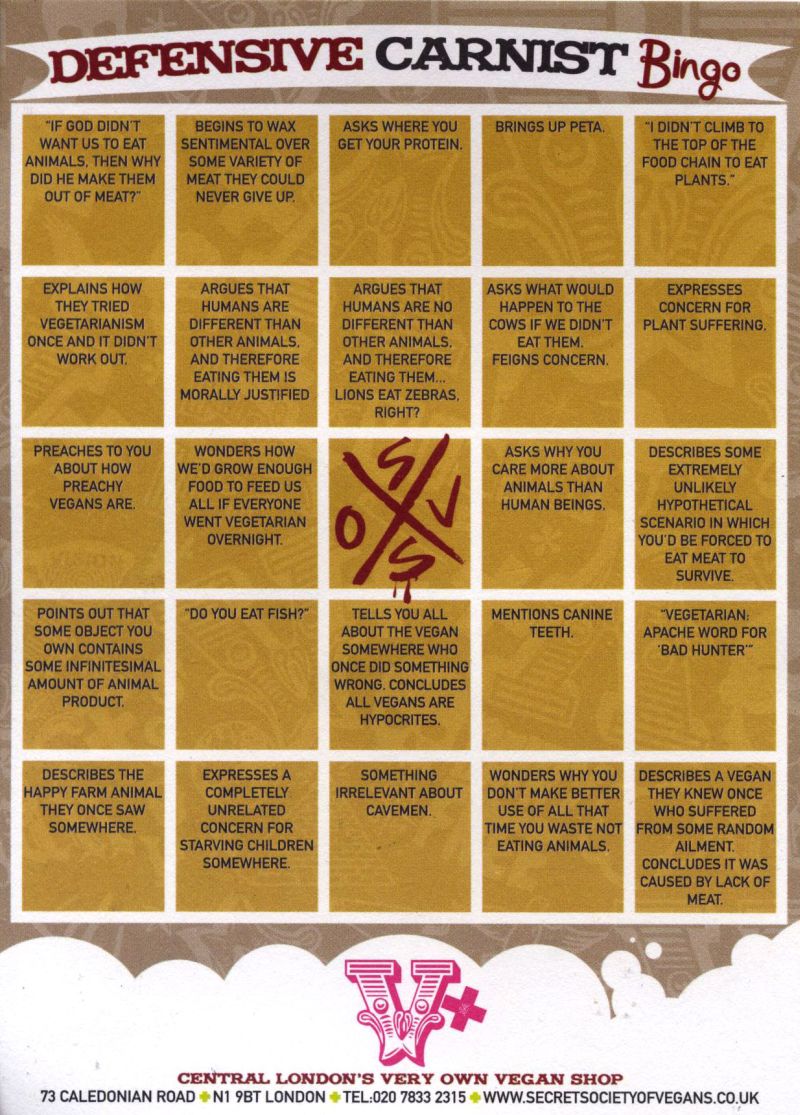 Tarim points out that 8-track tape is much more mind-boggling: the tape is a continuous loop, wrapped around a single spool, with one end necessarily being pulled out from the inner part of the spiral. How could such a mechanism overcome so much friction in order to run continuously?

[…] Week’s Puzzle Last week I asked why walk-in freezers have doors that cannot be opened from inside. As Richard pointed out, […]

[…] The Swinger — swinginating music automatically. As featured in Things 74. […]