Tim Link
After a lot of research and a second viewing with a lot of note-taking, I felt like I had got to the bottom of Inception. My diagram and explanation of what I think is really going on can be found on Tower of the Octopus.

Link
Clay Shirky’s view of the Wikileaks situation seems much more balanced and reasonable than anything else I’ve read on it.

Also, see the Wikipedia article on the Streisand Effect.

Quote
I can’t actually find who said this first on Twitter:

Pissing off 4chan: free. Botnet hire: $1000/month. For everything else, there’s Mast– oh, wait, not any more there isn’t.

Picture
From Dorothy ‘Cat and Girl’ Gambrell’s visualisation site Very Small Array, the United States of Autocomplete gives Google’s autocompleted suggestion of what should come after each state name (note results are regional, we’ll get different results from the UK) (click for full size): 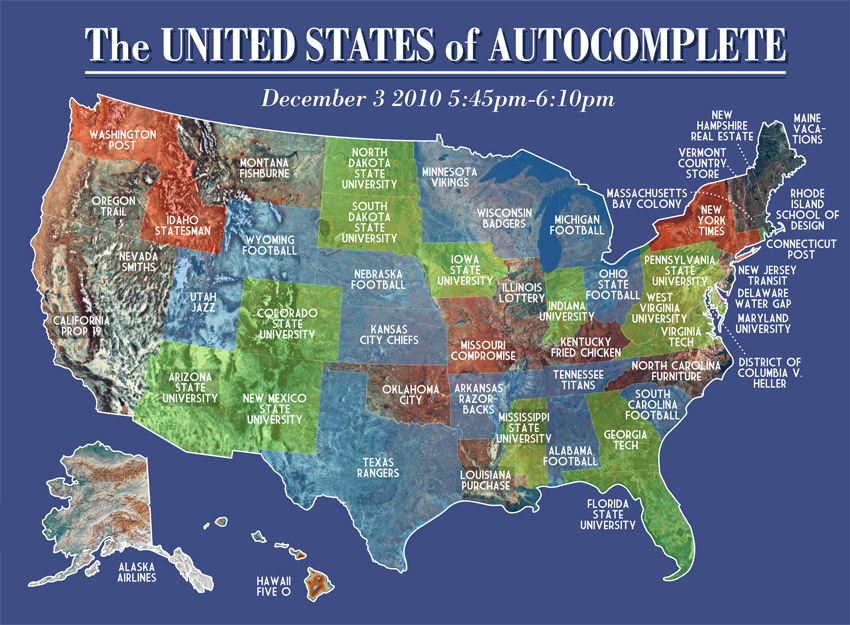 Last Week’s Puzzle
Last week I asked “why does the perceived attractiveness of any given individual vary so much depending on who you ask?”, which provoked quite a bit of discussion on the CC list.

It’s not enough for both parents to have ‘good” genes, but they should have “good” genes that are sufficiently different that any child will have the maximum possible genetic advantages.

Or as Xuan put it:

Attractiveness: Relative to your genes and where you want them to go.

So many couples look very similar though! Perhaps that is somewhat due to acquired mannerisms, but I’d have thought there’s a strong trend to find people similar to yourself attractive, to help similar genes survive

My summary of the situation was this:

To have the best chance of promoting themselves, your genes want to help others with similar genes (and procreating with them is pretty helpful), but also combine themselves with complementary genes. With both of these pressures in effect, and a distorting lens of nurture on top of the nature, we can’t be too surprised that people disagree on attractiveness.

Finally, Matt raises the logical next question – how to genes actually do this:

I think we may be giving too much credit to genes abilites to recognise similar genes and indeed complementary genes here. And after all, there are a lot of different genes with a vested interest here. I would posit that we decide who would be a good catch based on a set of genes (and so on) that try to recognise success in any form – one of the primary indicators surely being perceived social standing, but also apparent health, virility etc. So, regardless of precise genes, recognising good stuff.

I find the idea of encoding a DNA sequence that will give rise to a brain that will perceive the outside world and detect optimal reproductive opportunities almost completely mindboggling.

[…] Week’s Puzzle Last week I asked why our ears ‘pop’ when a plane takes off or lands, given that the cabin should […]