Next Week’s films
The Clone Wars. As I forecast many years ago, Star Wars is moving into TV series, but they realised they could release a feature-length pilot episode of the CG series in cinemas. I’m not expecting much. The live-action TV series, still a few years away, seems more promising to me.
Trailer: http://uk.youtube.com/watch?v=zPI48Ti548c
Imdb: Not yet rated
Rotten Tomatoes: 27%

If I’m feeling mad I may also go to see ‘You Don’t Mess With Zohan’ purely because I like the character trope of a nice peace-loving guy that happens to be totally badass and can catch bullets in mid-air :
Trailer: http://uk.youtube.com/watch?v=BzPlTvdkEvA
Imdb: 5.7
RT: 34%

A Puzzle
A stripper hands you a perfectly square piece of paper and a scisors. She tells you to divide it into 5 pieces of equal area without using a ruler or a compass. Can it be done? If so, how? If not, why?

Bonus puzzle
Where did I get the above puzzle from? (This is very difficult, but I just thought I’d throw it out there as it is at least theoretically knowable. The spelling of ‘scisors’ is in the original.) [No longer as hard as it used to be – T.M. 18/10/10]

A video
As with all great ideas, it seems obvious in retrospect. How clever can a fountain be?
(Video is rather long and you don’t miss too much if you skip through it a bit).

A link
A fantastic experiment that demonstrates how hypocrisy is innate to human beings – make sure you read the bit where they introduce wrist-bands towards the end as that is the most important result.

“Any sufficiently advanced technology is indistinguishable from magic.”

“Any technology that is distinguishable from magic is insufficiently advanced.”

“Never attribute to malice that which can be adequately explained by stupidity.”

Someone on Wikipedia says:

“Any sufficiently advanced incompetence is indistinguishable from malice. [citation needed]”

A picture
Eric Poulton’s entry for the Last Man Standing competition at ConceptArt.org; click through to his site to view the full fantastically deep image, with convenient ‘flip’ button in the bottom right. (If link breaks, I’ve mirrored the image here). 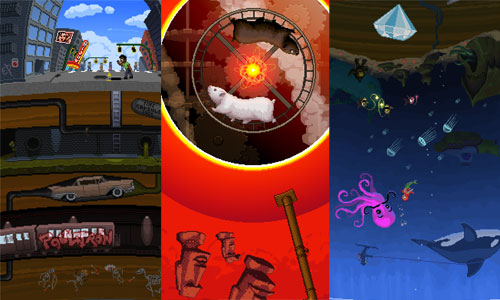