Films
I’ve cancelled my Cineworld card because there’s a lot of stuff I need to do in the next couple of months.

I did see Quantum of Solace, which I found to be surprisingly poorly scripted, directed and edited. Mark Kermode expressed my thoughts precisely, and also has some insight as to why it ended up this way:

Puzzle Answers
I forgot to answer the car light mystery from Things 31. It turned out that the back lights were not actually on, and only came on when braking (which is why they were on when I parked to check) – I proved this by nudging the brakes and looking at the cats-eyes on the motorway light up in my rear view mirror. After fixing this by finding out that the light-controlling dial also had to be ‘popped out’ to engage the rear lights (crazy design idea), cars continued to flash at me, which I eventually discovered was in fact due to me using fog-lights, which was because instead of being controlled by the dial that did everything else to do with lights, these were controlled from another, unlabelled part of the dashboard.

As for the Busaba Toilets, I went into the other room marked with the curving lines, only to be confronted by some unimpressed women. I went back to the room with the kinked line and it was only on closer inspection that I realised there were cubicles, but they were designed so their doors blended completely into the wall. So watch out for that.

This week’s puzzle
Simon Pegg has written an insightful article about why the modern trend for fast rather than shambling zombies completely misses the point.

I think he’s missed something himself though, as the question that naturally arises is this:

A quote
I used to do parkour/free-running with a small gang of similarly mad individuals on my university’s campus. Being the most cautious of the group, I never sustained an injury, whereas at one time or another everyone else did. The least cautious was a crazy second-year called Andy. One particular February night had left our playground icy and treacherous, but Andy was still ready to go ahead.

He reassured us by explaining:

“There’s more grip, because of the ice.”

A video
If you’re familiar with Pinky and the Brain, then you’ll be happy to know that it was dubbed into several different languages, including the excellent intro music, in German:

A link
Last week, Bex reported an unbeatable score of 0 for the colour-matching game. Here is your next challenge: eyeballing.

A picture
An amazing collection of pet Hallowe’en costume photos.

Films
I saw Mirrors last night. It started off as rubbish and ridiculous as it looked from the trailer, but then got a lot better, with a suitably ridiculous climax.

This week, Quantum of Solace, no more need be said.

Owing to extreme hecticness in the next few months, I have cancelled my Cineworld Unlimited card. The Films section may well disappear for a bit.

Puzzle Part 1
I ate at a Busaba Eathai last week. When I went to the toilets I was confronted with the two signs you see in the image below. I paused, then figured I had cracked the code. Where did I go? Make a guess now, then try part 2 at the end of this email. 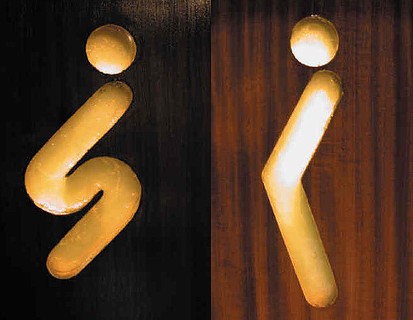 A link
…which is also a puzzle. Test your ‘colour IQ’
http://www.xrite.com/custom_page.aspx?PageID=77

A quote or anecdote
When paying for my ticket to see ‘Mirrors’, the guy at the till dropped a one pound coin into the vat of popcorn. Pretty soon three employees were scooping the popcorn around trying to find it while a manager was shouting ‘just complete the transaction!’ at them.

Puzzle Part 2
Looking at the Signs for the Busaba toilets (above) I concluded that they represented the two modes of toileting: standing and sitting. I further inferred that this implied gender. I entered the door marked by the kinked line. It was a simple square wood-panelled room, and all I could see was urinals and sinks. Urinals were not sufficient for my needs at that time.

What would you do?