People tend to assume children’s entertainment isn’t as good as it was when they were young, probably due to a three-pronged attack of rose-tinted nostalgia, the best shows being renewed (Sesame Street) or repeated (Bagpuss) so giving each new generation a sense of ownership over them, and poor curation for adults out of the current crop.

Recognising that this is a highly subjective enterprise, I’m going to pick out a few good examples of current kids fare in attempt to at least fix the latter. There’s even a kid-entertainment-based puzzle at the end.

TV Series with Puppets: Strange Hill High
I occasionally take a look at current children’s TV to see what sort of animation techniques are being used, and Strange Hill High caught my attention through its fascinating combination of designer-vinyl-toy-style puppets combined with CG mouth animation.

The premise is entirely encoded in the name so I won’t bother to elaborate on that. Most importantly, it actually makes me laugh a few times per episode, which can’t be said of many other TV series. To be fair, 90% of it is fairly standard kids ‘comedy’, but it’s sufficiently fast paced that I don’t mind sitting through that to get to the other 10%.

If you seek reassurance from known quantities, it also features the voice of Richard Ayoade (The IT Crowd), and the head of the writing team is Josh Weinstein (The Simpsons).

It’s on iPlayer right now (I recommend starting with 99 cool things to do with a time machine), and you can start to get a bit of a flavour (though not really enough) from the opening few minutes:

Picture Books: Octonauts
Again, I first engaged with this franchise through the graphical design: I was impressed by the stylishness of their bath toys. It turns out there’s a whole CG animated series, which is quite good (mostly due to the use of regional accents), but it all started with a series of charmingly whimsical picture books. Here’s a few snippets to give you an idea: 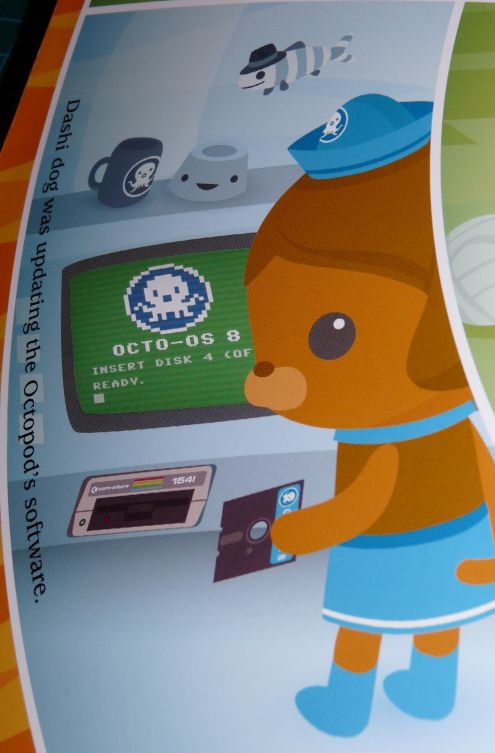 Decoding the language of a sad fish: 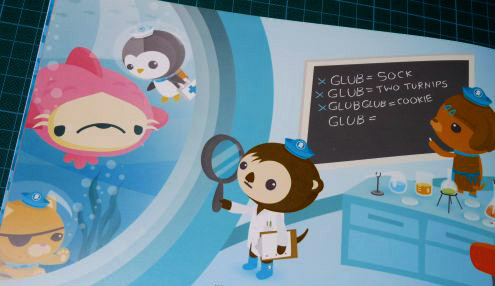 Pictures that glow in the dark (from this book), which it turns out fascinate me just as much as when I was a kid: 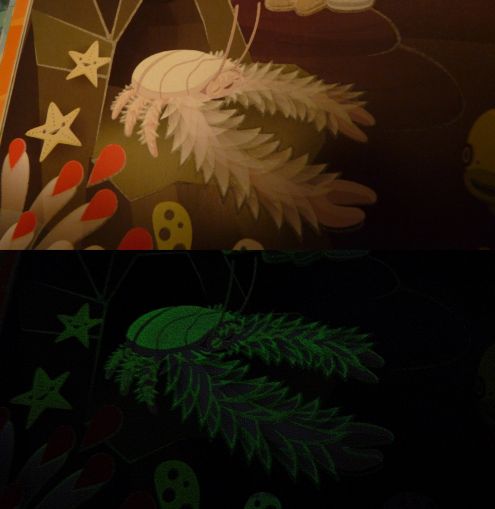 Weekly comic: The Phoenix
Now I look back on it, more than anything The Beano looks like a primer on culture, mapping out the tropes and stereotypes of an idealised sort of pre-war age (vicars having tea, go-carts, hi-jinks, the threat of The Slipper), equipping the child with the reference points needed to navigate modern entertainment, while keeping said child entertained with a never-ending stream of speech bubbles that all end in exclamation marks (I only noticed this years later, and haven’t been able to read more than a few pages at once since).

The Phoenix is a modern kids comic that’s nothing like that. For one thing, it features work by James Turner, who I’ve featured in Things before (with this mind-bending 9-panel comic). 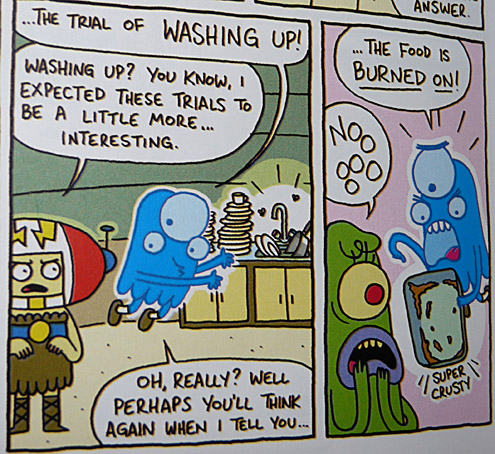 It’s also got a bunch of other surprisingly good stuff. Bunny vs Monkey by Jamie Smart features high-quality hijinks like this and ever so often will just go incredibly dark, like this: 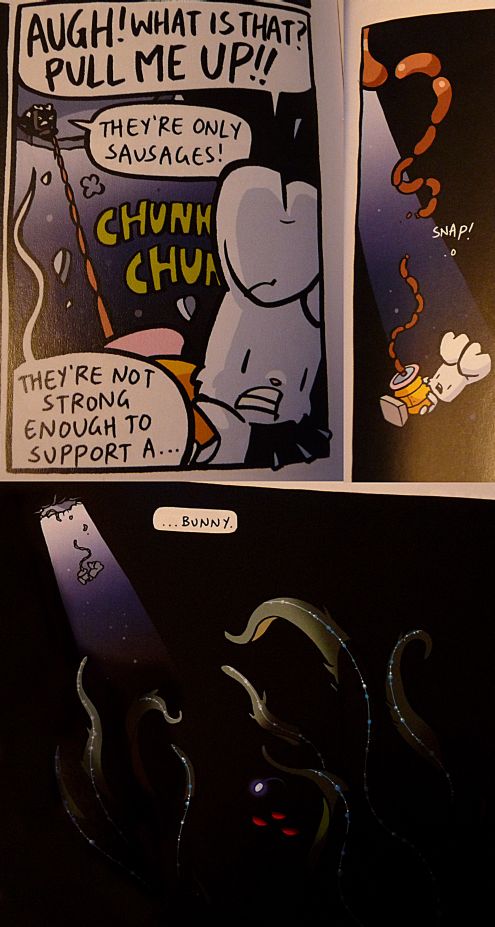 For being simultaneously educational and entertaining, I’ve never seen better than Corpse Talk by Adam Murphy, in which he interviews the reanimated corpses of the “dead famous”, and doesn’t really sugar-coat things that much: 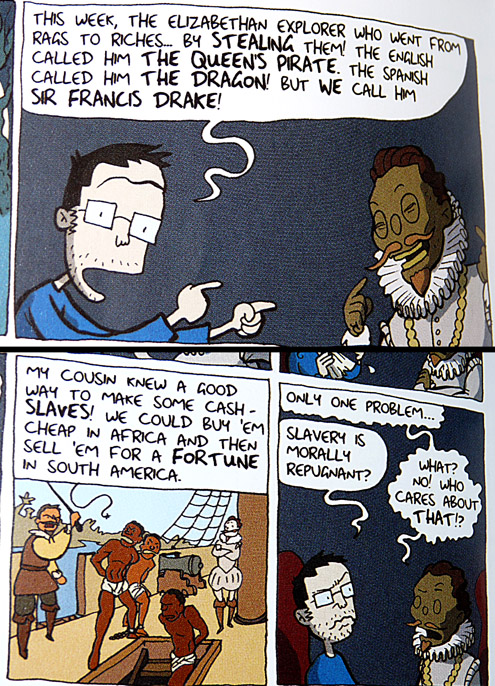 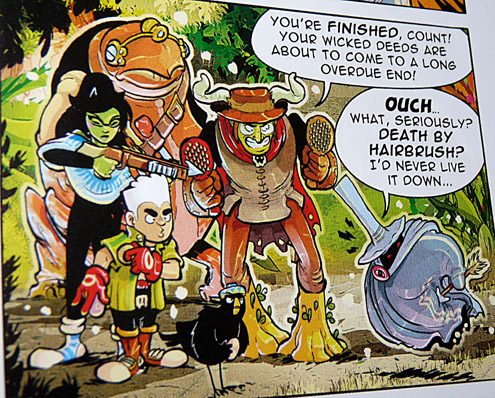 Finally, ‘Professor Panels’ by Neill Cameron teaches kids to make their own comics, sometimes delightfully deconstructing the form, such as the episode in which a mecha-comic-creating-monkey starts to misfire when a banana is added to its workings: 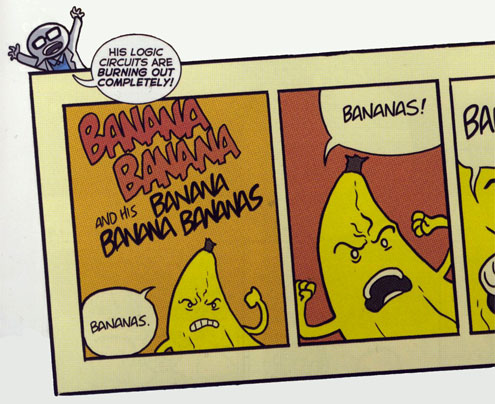 If you’re interested, do check out their website, which has a free digital issue, a link to the iPad app, a starter pack you could buy, and a bunch of other good stuff.

Video: Tune-Yards My Country
I like this music, and the video is pretty good too. Be sure to stick around for the funky syncopated brass solo around 2’40”.

Puzzle: The Perfect Power-up Purchase Path
The LEGO console games are aimed at children, but provide some solid co-op entertainment for adults too, especially if you derive pleasure from smashing things and collecting coins – or in the LEGO-themed parlance of the game, ‘studs’.

In many (all?) of them, studs collected in the course of play can be used to purchase various upgrades. One such upgrade is the ‘x2’, which once bought, doubles the value of all the studs you subsequently collect – so a level where you might collect 100,000 studs will instead net you 200,000. There are other similar upgrades, like the ‘x4’, which multiplies by 4 – and they apply cumulatively, so if you have both x2 and x4, you get an 8 times multiplier, so that level would now net you 800,000 studs.

Naturally, the more powerful multipliers are more expensive to buy… but having a multiplier will help you save up for the others more quickly. Here’s a price list:

So, the question naturally arises: if you want to eventually purchase all 5 of these multpliers, what order should you buy them in? (In case you were wondering, yes, they really do keep accumulating, so when you have them all you have a 2 x 4 x 6 x 8 x 10 = 3,840-times multiplier).

For the more mathematically inclined: what is the generic strategy for any multiplier series f and pricing series g? For the more game-design inclined: if you really wanted to encourage children to do some maths, how would you design the pricing for these multipliers? Alternatively, if you wanted to make the game as fun as possible, what multipliers and prices would you set?

Answer: Spoilers Sometimes Matter
Last time I asked if we could really believe research demonstrating that spoilers always improve enjoyment. The consensus seems pretty clear – even though ‘mystery’ and ‘twist ending’ stories were included in the research, it nonetheless seems very likely that there exist a few counter-example stories in which experiencing them unspoiled adds a tremendous amount to the experience. Since one can’t tell reliably tell which these are in advance, it seems wiser to err on the side of caution, and continue to avoid spoilers.