This issue of Things was initially drafted in January 2016 and for various reasons is just coming out now. Let’s see how out of date it is…

Mobile Game of the Moment: Dreii

Mobile gaming is very exciting, because touch-interface location-aware always-online devices open up an amazing new landscape of interactive possibilities. Mobile gaming is also very depressing because these possibilities are rarely harnessed in an interesting way, and even when they are it rarely leads to commercial success.

This is exactly why I’m recommending you get Dreii right now (available on Android, iOS and also on Steam).

It’s an elegant physics-based puzzler in which you try to stack objects under various challenging constraints. The really brilliant bit is that you get to co-operate with anyone else that happens to be playing the same level (on any device) at the same time as you. There’s also a rather lovely map visualisation in which you can see what levels others are playing to better seek them out – or go back and help another player make it through to the one you’re stuck on!

The helpfulness of others is massively varying, which is part of the charm. I recommend it right now as the recent launch ensures a goodly surge of currently active players.

Update: well, that was written about a year ago, so I can’t really recommend it as much because few are now playing it. You can do local co-op with someone else playing at the same time though, so it’s still worth a go if you can arrange for that!

Or go and play the other brilliant game I got into in the intervening time: Snakebird (iOS, Android, Steam), an incredibly simple yet extremely difficult puzzle game.

Or go and play Crash of Cars (iOS, Android), which is real-time arcade-style car combat and is being played by a few million people at the time of writing.

Humans are More Complicated than Physics, part 94: Weight vs Diet

If you want to lose weight, don’t eat. This is not medicine, it’s thermodynamics. If you take in more than you use, you store it.
– Michael Bloomberg

It seems most people agree with Bloomberg’s appealing logic. It turns out, as it often does, that humans are more complicated than simple physics would suggest.

Vox has a great look at the energy-in energy-out model here. The most striking conclusion of their wide-ranging review of research is that exercise is great for health, but not for weight loss. For weight loss, diet is a much more important component. So Bloomberg is sounding roughly right, but the mystery then deepens when we consider a study that found people on the same diet and exercise regimes put on more weight now than they did in the 80’s.  Note that although the Atlantic’s headline is “Why It Was Easier to Be Skinny in the 1980s”, the article doesn’t answer the question, because we don’t actually know. We just have some theories.

Finally, on Aeon, David Berreby dives a lot deeper into this mystery. Most striking for me was the finding that over the last two decades, animals as well as humans have gained weight – including lab mice, which have gained an average of 11% per decade despite having rigorously consistent diets. If you want to read about some fascinating theories on why this might be happening (light? BPA? A virus?), go check it out.

Since that was all a bit depressing, here’s some fun data on how the UK’s diet has changed over time.

Quite a few months ago (er, a year ago now) Charlie Stross wrote about the Paranoid Style in politics. He cites two fascinating essays charting the relationship between paranoia / conspiracy-theories and US Republicans (one from 50 years ago and one more recent). Things like “9/11 was an inside job”, vaccine-related conspiracies, or any time you hear the phrase “Liberal elite”. Stross then adds his own interpretation of how the internet has reinforced this and given rise to (take a deep breath) an “ad-hoc movement of angry ideologues who have jabbed their fungal hyphae into the cerebral cortex of Reddit and n-chan to parasitically control the rageface collective.”

Well, a year has gone by and this has all become rather more clear. I think the only useful thing to add is that Popularism (in the sense of a political movement that believes most of the existing power structures are self-serving, corrupt, and out-of-touch) is clearly a close relative of the Paranoid Style.

If you want to search based on an image (to find where it came from, or a higher resolution version) you can use TinEye and get limited but exact results. Or you can use Google’s “Search by image” functionality to get a wide range of approximate results. I do this quite a lot while trying to track down the artists behind work I post on my daily drawing Tumblr.

I recently tried to use it to trace the origin of this piece: 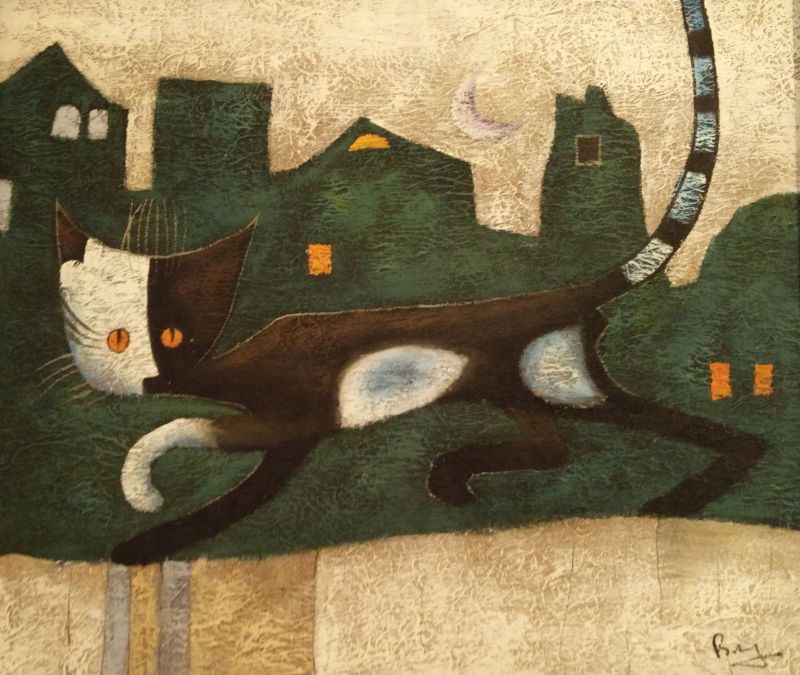 I was unable to find the artist, but I was extremely impressed that Google suggested a page of ‘similar images’ which were indeed a lot of paintings of cats with a similar colour palette and often distorted proportions: 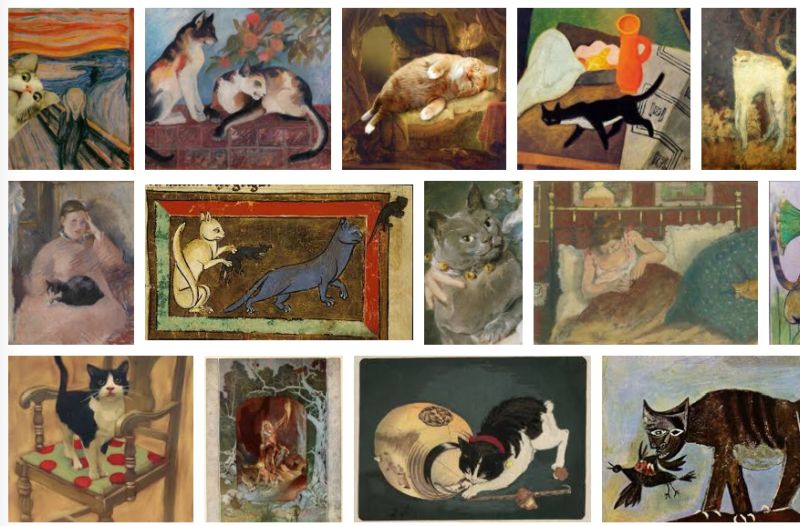 You can of course use these properties of the search algorithm to generate art.

“I can Tolerate anything except the Outgroup” is an essay by Scott Alexander on filter bubbles and tolerance. It’s so interesting to me that I’ll summarise it all below, but I recommend reading it in full.

“…libertarian political beliefs, Dawkins-style atheism, vague annoyance that the question of gay rights even comes up, eating paleo, drinking Soylent, calling in rides on Uber, reading lots of blogs, calling American football “sportsball”, getting conspicuously upset about the War on Drugs and the NSA, and listening to filk”

In an excellent coda, Alexander then realises that he’s doing the same thing: criticising a group he notionally is a member of (the Blue tribe), but actually criticising his Outgroup, as he realises he’s probably Grey.

While I think this is an interesting argument, I do think it’s important to note that being intolerant of a group of people who hold opposing political views (which can’t be identified on sight, and can change) seems far less egregious than being intolerant of people who simply look a certain way. Views are, after all, one step away from Actions, but that’s a distinction I’ll get to in the next edition of Things.

I’m very interested in how the internet is changing the music industry. Some things are better (from some viewpoints): it’s cheaper to make music and distribute it; it’s easier to find and listen to a wider range of music. Some things might be worse, but it’s hard to tell: has the average amount of revenue made per song, or per minute of music, gone down? What about for the most popular 10 artists? What about for the median artist by income? Are there fewer full-time musicians, or more?

I’ve not seen good data on that, but this piece in The Economist is suggestive at least: the average age of festival headliners has gone up by 10 years over the past 20 years. But it’s not clear if that’s just because demand (for festivals) has gone up, and supply (of festival-pleasing artists) has risen more slowly, driven by older artists whose audiences now find festivals cater to their needs.

Over on PopJustice (which has my favourite cookie warning message), they suggest the move by Apple to streaming is the final nail in the coffin for not just paid downloads, but a thriving new music industry in general. If this seems hyperbolic, bear in mind that music buying doubtless follows a Pareto curve, and the small cohort that account for most of the music-buying have the strongest (short-term) incentive to switch to streaming.

With all this going on, it’s interesting to take a look at royalty distribution on streaming services. Superficially it seems simple and perfectly fair: they collect subscription fees and ad revenue, and then distribute them to artists based on how often their tracks have been played. This is how it works on Spotify.

But as this thoughtful article points out, that’s not necessarily the fairest. It would be fairer to directly distribute the revenue from a particular customer to the artists that customer listened to. That doesn’t sound like much of a change, but it really is, so I do recommend reading the article to see why. The author also argues that such a situation would be better for everyone, even the labels, and as such should be adopted. I’m less convinced by that. It’s true ‘on average’, but I suspect the current system benefits the bigger labels more, and they have a lot more of the power.

On the plus side, with Apple and Google (and others) getting into the game, perhaps this might emerge as a competitive strategy from one of them…

On the subject of new music, well, Dan Deacon is one of my favourite musicians, and it seems Adult Swim had a bunch of animators contribute segments to go with the track “When I Was Done Dying” from his most recent album, and all of those animators seem to have put in about twice as much effort as I was expecting, with this mind-boggling result:

For an eye-opening insight into what one might term ‘soft’ racism, I highly recommend reading this sermon followed by these excerpts on prosopagnosia. Primed by the first article, the last couple of paragraphs of the second hit pretty hard.

I found it absurd that I could be on a train with internet access and yet be unable to find out when that train was expected to arrive at the various stops along the way. Evidently I wasn’t looking hard enough, because it turns out this brilliant website has that covered: RealTimeTrains.co.uk

There’s also a wonderful site with much more precise data than most people would know what to do with regarding the exact positions and statuses of trains at various key junctions. Each day a random map is free, and it’s £10 for a full year subscription. I haven’t done that yet but it’s very tempting. Check it out!

Of course, once you have this data, you want to make more efficient use of it. For instance, it’s possible with many clicks around RealTimeTrains to figure out if you can make a more efficient connection by boarding a delayed train that was originally supposed to depart before you arrived. So the next thing I need is a service that will tell me not just the best route, but the best route based on where trains are right now.

If, like me, you ever wanted to see maps of all the underground stations (specifically the 120 that are actually underground), Ian Mansfield has cleaned them all up and presented them nicely here.

Finally a couple of things that gave me a bit of ‘future shock’.

This (proof-of-concept) camera is powered by the light that its sensor receives. Which, given the similarity between a digital camera’s sensor and a solar panel, actually makes sense. So cameras don’t need batteries. Wow.

Secondly, neural networks can make art. Okay, there is a human operating the controls and deliberately manipulating things to make cool-looking stuff, but maybe later a neural network can figure out what ‘cool-looking’ means better than us, and start producing all kinds of cool stuff. Okay, that bit’s probably a lot further away, but this does make me lose a bit of confidence in the belief that artist’s jobs are robot-proof. Nobody’s job is safe from the robots. The robots are coming. We have been warned.