This week’s films – one line reviews
The Happening was a huge disappointment, anticlimactic in every way.
(My review: http://uk.youtube.com/watch?v=_Mpa9ViwoMg)

The Incredible Hulk was impressive yet strangely forgettable.
(My review: http://uk.youtube.com/watch?v=ltWgo9TXvKk)

Next Week’s film
Wanted. It looks like the standard Hero’s journey (ordinary guy discovers he is in fact the son of the world’s best assassin and must take up his mantle to protect Fate itself!!) with a great cast. This is my personal most anticipated movie of the year, since it is directed by Timur Bekmambetov, who directed my favourite movie of last year, Day Watch. He has an amazing talent for making the incredible look plausible, yet still awesome. I am seeing this at the first possible opportunity.

Fantastic teaser trailer featuring a single illustrative fragment of the film:
http://uk.youtube.com/watch?v=oTRh66yvYpc [Video removed – this short teaser kind of does the job though – Tim 23/8/2010]

A Puzzle
In answer to last week’s “what comes next”: heaven.

This week: Professor Layton and the curious village is a puzzle game for the Nintendo DS, and my favourite puzzle in it is number 100. The challenge is to work out how to loop seven elastic bands around the pins in the board so that each one is held in the shape of a square, and no pin is used as a corner twice: 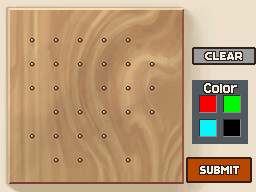 A Quote
Another baffling moment from my friend Nick:

Nick: Have you heard of the psychologist, Wasslavich?
Tim: No…
Nick: Neither have I.

A Link
A lesson is learned but the damage is irreversible is the name of the webcomic, and each strip generally follows that theme and stands alone. It’s also mindblowingly insane and creative and I can’t just link to a single strip. So, depending on which opening line you like the most, take your pick:

“Dale, I owe the legendary ghosts of mafia bosses $80,000!”
http://www.alessonislearned.com/index.php?comic=20

“The universe was so ashamed that you slept late, it is shrivelling into a raisin.”
http://www.alessonislearned.com/index.php?comic=31

A video
I can’t understand why I haven’t linked to this video before. It’s an excellent example of the “Anime Music Video” (AMV) format, in which scenes from anime are ingeniously edited to create a video for a song, in this case the brilliant “I wish I was a lesbian”:

A picture
The surprisingly rarely seen true scale version of the London underground. The stylised version we are familiar with is actually an incredible triumph of marketing that turned around the fortunes of the tube.

[…] of the London tube map regularly feature in Things: in the past I’ve posted about a to-scale tube map, a curvy tube map, and a travel-time interactive tube […]

[…] cities A popular semi-regular feature of Things is alternative tube maps (see the better tube map, to-scale tube map, curvy tube map, and travel-time interactive tube map).  So we might as well just cut to the […]